The roundabout has many, many magical properties but key for East Avenue, the a speed challenged connection between Colchester and Main Street, is the traffic calming property extending several hundred feet along each leg.  The traffic calming at each end with a roundabout at both Colchester and Carrigan Drive enables addressing safety and speeds between.  With roundabouts in place, speed management can take place in the central area.

Charest explained that a slight shift of the roundabout placement a few feet toward the former Trinity College side of Colchester not only removes any interference with the India House restaurant facility but also results in a better alignment with East Ave.  The roundabout is a real asset to the India House parking area as no vehicle will ever have to make a left turn to enter the parking area, and experience has shown here in Vermont exiting right or even left at peak hours involves little or no delay because of reduced speeds of traffic at the roundabout.

From a safety standpoint, East Ave/Colchester is one of the “BTV Crash 20” intersections (all but one signalized) and all averaging at least one injury in the five year span used to determine the 111 current Vermont high crash intersections (18% in BTV!).    Our five downtown Vermont roundabouts by comparison in over a half century of service recorded not a single cyclist injury, one non-serious pedestrian injury and four non-serious car occupant injuries—less than one injury a decade.  Note that bicycle designs for roundabouts have evolved since 2000 and are being applied to the Shelburne Street (“rotary”) roundabout at the “intersection of death” as some in the neighborhood call it and here at Colchester Ave/East Ave.

The U.S. in falling from first to fifteenth in the world in highway safety now has more than twice the deaths per vehicle mile of travel of the four top nations, 21,000 excess deaths yearly, a truly highway pandemic of deaths and serious injuries—about 30 excess deaths here in Vermont.  An AAA highway infrastructure investment of ten proven death reducing fatals by 63,000 over 20 years finds roundabouts first on the list, roundabouts alone accounting for 30% of the reduced deaths (about 20,000 or 1,000 a year).  Overall the roundabout cuts serious and fatal injuries by about 90%.  That is why in New York since 2005 and increasingly now in other jurisdictions intersections policy is “roundabouts first.”

Burlington Crash 20 intersections averaged 28 injuries a year, about 20 percent of the 150 injuries on our streets yearly.  We experience a fatality about once in three years, with most recent since 1998 at intersections, three pedestrians, three car occupants and one cyclist.  One of the pedestrian fatals was on the crosswalk on Barrett at Colchester/Riverside, Sam Lapointe of Winooski.  Each week during “normal” times two car occupants are injured and one pedestrian or cyclist. 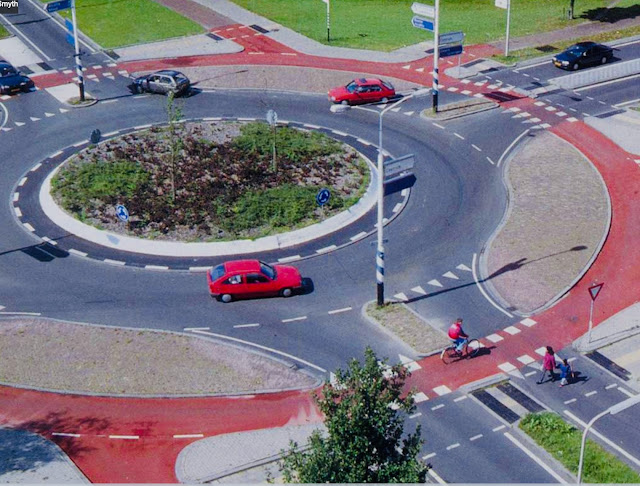 Colchester/East is the 15th highest high crash intersection in Vermont with the following recorded in the five year period tabulated:  44 crashes, 9 injuries and 35 Property Damage Only crashes.  Based on Vermont experience a roundabout would cut the injury rate from rate of about 18 a decade  to one or two.  Few of us have escaped the pain and suffering experienced in our family or those we know each decade from car crashes.  There is also the heavy cost in police/emergency incidents and incident management as well as the cost we all bear in car insurance rates.  The fact that car insurance is done at the provincial level in British Columbia and the experience of few claims at roundabouts led to that province being first in Canada to adopt a highway “roundabouts first” regulation about 2010.

It is my suggestion that Burlington seek full 100% funding with federal funds of the roundabout conversion at Colchester/East as the project could quite easily move ahead because of its priority and right-of-way availability.  The Shelburne Roundabout is 100% safety funded (including utilities).

Let’s hope whoever is Mayor in 2021 that the roundabout demonstration goes forward on North Winooski at the North St intersection (another Crash 20 member), the “intersection of death” after a decade of waiting gets it roundabout in 2022, and East Ave/Colchester Ave “Dutch” roundabout (first for Vermont!) move swiftly to bring roundabout magic to the area.

Website at CCRPC with all study documents, background, etc.:
https://www.ccrpcvt.org/our-work/transportation/current-projects/scoping/colchester-ave-bikeways-parking-and-intersection-safety/

Posted by Tony Redington at 8:09 AM