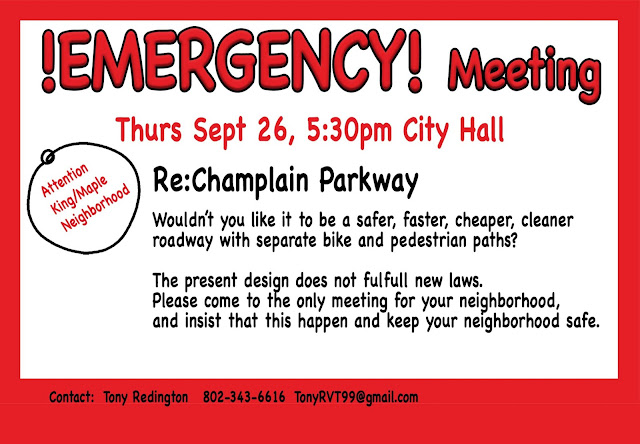 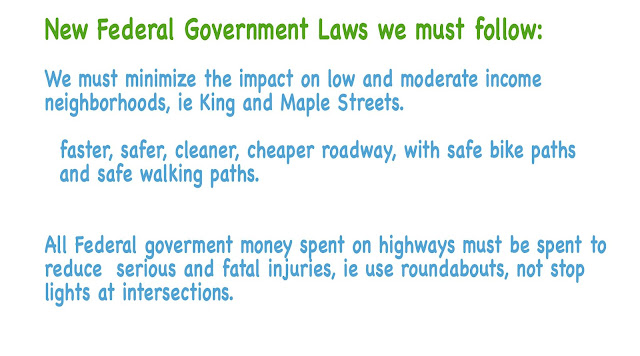 Posted by Tony Redington at 5:19 AM

NEW! Sign the New Petition to Stop the Hurtful Parkway and Start a Public Re-Design for a Street Our City Can Love!! Use the comment section to make your views known!
https://www.ipetitions.com/petition/re-design-champlain-parkway-for-safety-climate
Our Mission!!
The mission of the Pine Street Coalition is re-design of the Champlain Parkway by re-opening a new EIS process in order to incorporate “best practices” of today which include: (1) re-directing the “purpose and need” to meeting the needs of theSouth End neighborhood and away from facilitating the movement of cars to downtown; (2) reducing instead of increasing the number of roadway injuries to residents and visitors; (3) decreasing the environmental impacts, particularly in regard to the stressed Englesby Brook; (4) provision of separate and equal facilities for those who walk and bike along the corridor; and (5) utilize modern roundabouts to reduce injury rates to all users, cut global warming emissions and other pollutants, reduce gasoline use, reduce delay for all users, manage speed and thereby reduce noise levels and add scenic quality.
CHAMPLAIN PARKWAY REDESIGN GUIDELINES Let's Do it Right the First Time!
The Champlain Parkway Redesign Guidelines (Guidelines) arose from meetings and discussions in the South End and throughout the City. The grassroots group, Pine Street Coalition, seeks a new design process incorporating new laws and plans, particularly safety changes. The Burlington Walk Bike Council developed a number of walk and bike facility recommendations. Safety remains the principal consideration both dismissed and ignored in the 2009 environmental document and current design. The Guidelines provide a framework for viewing changes to the current obsolete design of the Parkway and present a new approach on choices possible in a new democratic design process once the current project design reaches its well deserved end. The Parkway dates from 1960s, the current design from a decade ago—times do lead to changes! The Guidelines include dealing with four major flaws reflective of the obsolete, invalid 2009 environmental document:
--Cutting 1.5 mile lane miles of roadway, including constructing on (not two!)--streets between Home Avenue and Flynn Avenue. Also provide for a safe, quality access to both new developments, City Market South End and Petra Cliffs --Retaining full connectivity of Pine Street now set to dead end short of Queen City Park Road which forces South End residents onto Shelburne Road to access Hannaford, the Palace and Lowe's
--Installing roundabouts instead of six new obsolete and unsafe signalized intersection to prevent an increase of about eight injuries a year to South End travelers --Providing separate and safe sidewalk and bicycleway from Home Avenue to Curtis Lumber
—Improve air quality and safety for King Maple low income/minority neighborhood while Flynn Street ending of roadway insure minimal traffic changes on Pine Street
--Conserving four acres between Flynn and Lakeside Avenues for economic development of the “Gilbane” property (now a large parking area) and for protection and improving stressed Englesby Brook